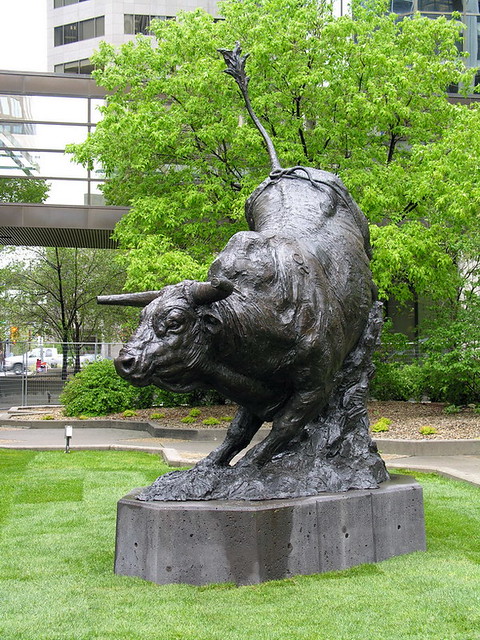 In 2008, The Calgary CFA society partnered with the CFA Institute and the Calgary Stampede to create the “bullish on your future” art initiative.  The CFA institute is a global, not-for-profit organization comprised of investment professionals.  While the bull has come to represent a distinct global financial symbol of prosperity and optimism, the Bullish on your future art initiative is also inspired by Outlaw, Canada’s most famous bull. The real Outlaw, a red and white speckled Brahma bull weighing 1,800 pounds was born in 1997 and represents the free spirit of Calgary.  He rose to fame being ridden only once for the full 8 seconds in 71 trips out of the chute before 21 year old Justin Volz became the first and only rider to win the $50K prize at the 2002 Calgary stampede, gaining him the title of Calgary Stampede Bull rider Champion.  He was purchased by the Calgary Stampede in 1999 and died in 2004.