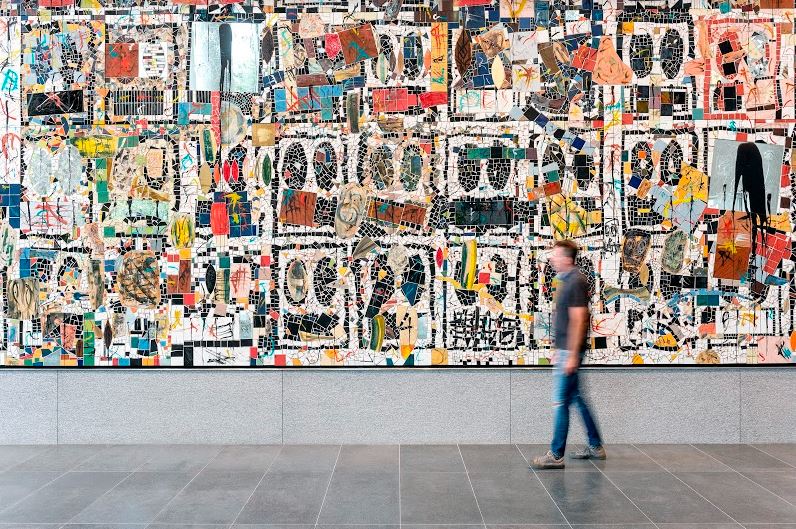 Brookfield Properties commissioned the first ever public work by Rashid Johnson at 200 Liberty Street at Brookfield Place, Untitled Broken Crowd, 2020. The installation, a continuation of Johnson’s “Broken Men” series, is his largest work yet. The commission coincides with the building’s reimagined public space, which was designed in part to accommodate Johnson’s vision. The glass façade of the building also allows for the work to be highly visible from the surrounding streets.

The tile mosaic lends itself innately to public spaces and architectural ornamentation, and the work represents a formal breakthrough in Johnson’s series of mosaics. Visitors to 200 Liberty Street will find a sprawling wall of wild and agitated faces, fractured both metaphorically and physically. Johnson’s strikingly poignant piece embodies the complex emotions felt in the midst of shifting social realities.

Composed of handmade ceramics, wood, brass, oyster shells, spray paint, wax, soap, and mirrors, Johnson’s soaring mosaic spans 14 by 33 feet. The artist’s choice of media is spun out from a series of small-scale mosaics that Johnson produced for a show in 2018, and references the history of public art in New York as well as his native Chicago. Johnson’s subject is a continuation of his earlier “Anxious Men” works, first debuted in 2015 and “Anxious Audiences” which were first shown in 2016. In this series, Johnson renders a grid of anonymous, abstract faces with wide eyes and bared teeth representing a crowd of figures riddled with anxiety.

“From the beginning, this piece aimed to represent the collective concerns and anxieties we share,” said artist Rashid Johnson. “At this moment in time, we’re experiencing a deeper sense of urgency, distance, and isolation than ever before. This piece brings that new reality to life on a grand scale.”