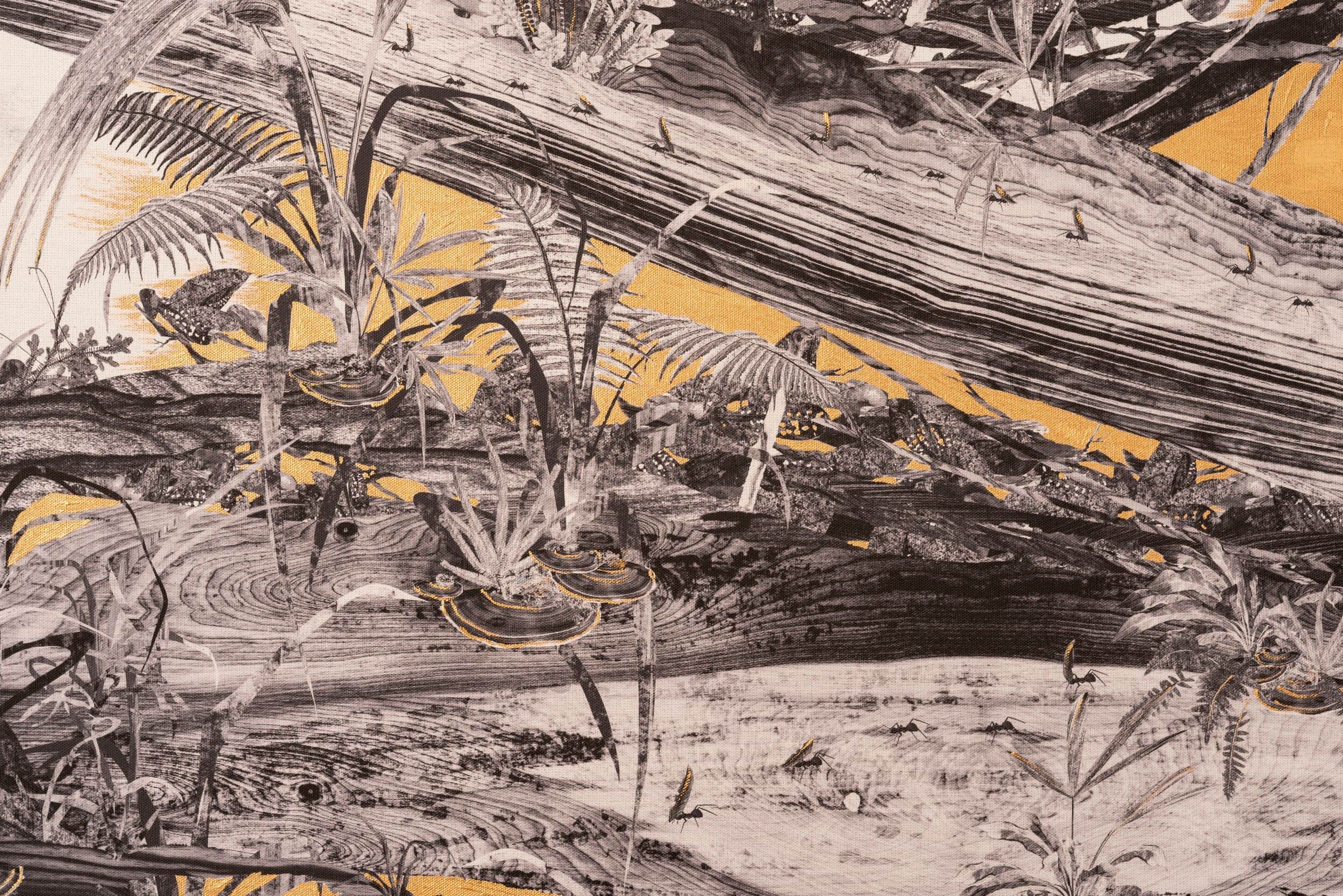 Colombian visual artist Tatiana Arocha’s work is rooted in her layered relationship to her country’s vulnerable lands, particularly its rainforests. Arocha recreates environments that both visually beckon and entice, but also serve as a reminder of the historical and continued exploitation of natural ecosystems. Her work seeks to make the continued destruction of remaining natural regions—which often feels abstract—real and personal, inviting the viewer to both delight in nature and challenging them to form a meaningful, immediate relationship to its endurance.

Arocha’s process for creating work originates from fieldwork she does in the tropical forests of Colombia, Brazil, and Peru. She seeks to learn more deeply about the ecology of the region, and documents and archives plants by pressing, collecting, and photographing specimens that will later be transformed in the studio using a variety of digital and analog approaches, including drawing, monoprints, digital painting, and other techniques. Arocha alters the array of flora and fauna she has collected to recreate and reimagine endangered ecosystems. Working mostly in a monochromatic palette of black, white, and grey, the artist employs occasional shimmers of gold within her work which act as a metaphor for the endangered natural world and a reminder of human greed and the violent costs of extractive economies.

Tatiana Arocha is a visual artist originally from Bogotá, Colombia and now based in Brooklyn. Her practice involves creating detailed, layered, graphic compositions and applications of digital techniques learned during her former career as a graphic designer and illustrator. Arocha has exhibited internationally as well as locally in the New York area, with solo shows at Sugar Hill’s Children Museum for Arts & Storytelling and the Queens Botanical Garden, and group exhibitions at Smack Mellon, Wave Hill, BRIC, and The Wassaic Project, as well as the Lightbox Exhibition Project for the MTA Arts & Design in the NYC subway from 2017-2019. In 2019, she received a Sustainable Arts Foundation award for mixed media. Arocha has participated in LABverde Art Immersion Program, located in the Brazilian Amazon; Centro Selva, in the Peruvian Amazon; Arquetopia, Puebla, Mexico; and has been awarded residencies at Wassaic Project, Wassaic, NY; and Zea Mays Printmaking Residency, Northampton, MA. Learn more at tatianaarocha.com.