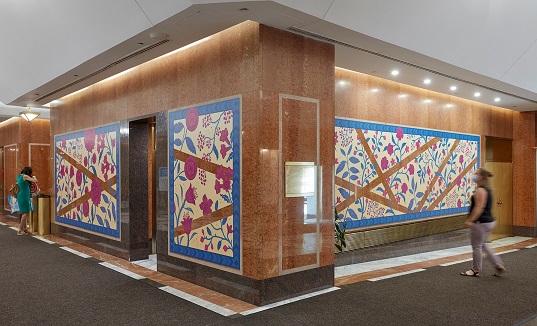 Brooklyn-based artist Dan Funderburgh’s large-scale vinyl artwork in the lobby of One Pierrepont Plaza is inspired by a recent spring visit to Brooklyn Botanic Garden. A series of three murals depicts colorful ﬂowers at different stages of budding and blooming over, under, and around thick traversing lines. With this work, Funderburgh captures the anticipation and excitement of spring and rebirth, particularly after a harsh winter. His work celebrates the drive to ﬂourish and overcome obstacles that is within all of us – the notion that no barricade can hold us back forever, and that we will overcome and thrive again.

Dan Funderburgh is a Brooklyn-based illustrator, artist, and wallpaper designer whose creations are rooted in the world of decorative arts. Born in Seattle, Funderburgh grew up in the Midwest and received his BFA from the University of Kansas. After moving to New York City, Funderburgh established a partnership with Brooklyn-based wallpaper studio Flavor Paper. Funderburgh’s screen-printed wallpaper designs have been exhibited at the Museum of Art & Design, and The Smithsonian, and are in the permanent collections of the Cooper Hewitt, Smithsonian Design Museum and the Brooklyn Museum. Funderburgh has been commissioned by the MTA to create permanent installations for train platforms in the Bronx and in Long Island. Learn more at danfunderburgh.com.