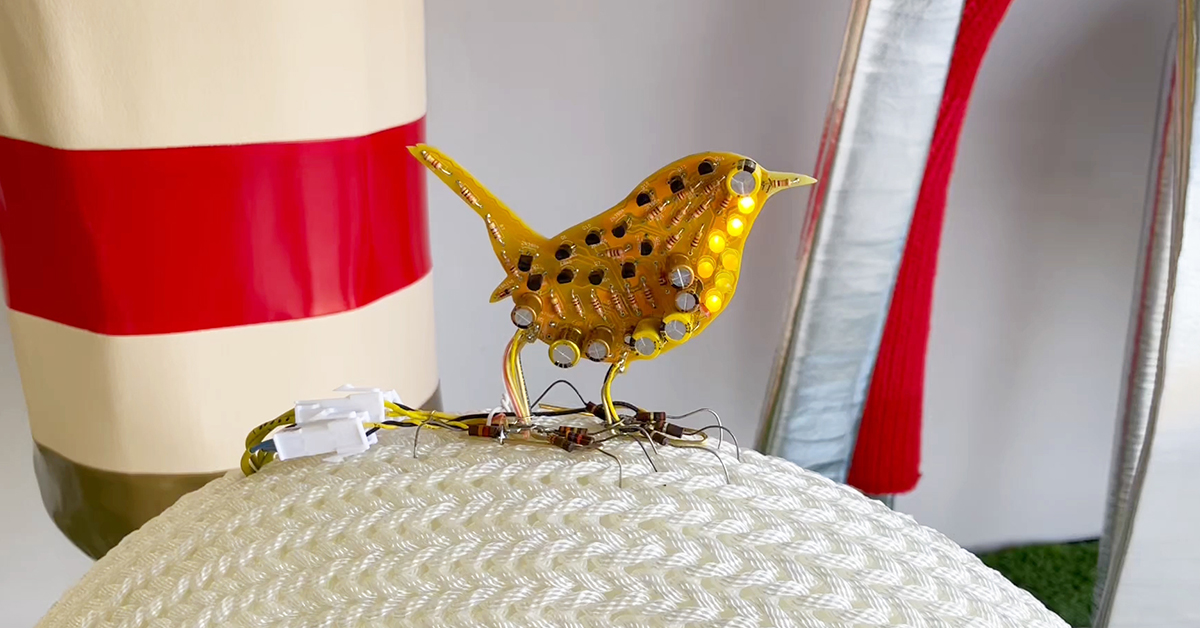 Circuit Garden celebrates our electronic culture and invites us to contemplate nature – specifically human nature in symbiosis with machine intelligence. Artist Kelly Heaton presents a large-scale circuit board in the form of an artificial lawn that is “planted” with plush sculptural electronic devices. The work evokes a playful garden, or a vintage circuit board that has been enlarged to human scale. Situated in the landscape of Circuit Garden, viewers will discover smaller functional circuits that mimic animal behaviors, such as birdsong and chirping crickets. As the viewer approaches the installation to investigate further, Heaton’s analog electronic designs generate these naturalistic sounds in real time.  The sonic landscape of Circuit Garden is thus brought to life by electric vibrations of artificial origin and not recordings of real birds and crickets, as one might expect.

Kelly Heaton is a mixed media artist who believes that electricity is the most important medium of our time. She uses circuits to explore the “spark of life” in biological organisms as well as machines, acting as a techno-spiritualist to portray the immaterial character of her subjects. Heaton’s art has been featured in the United States and internationally, including the ADAA Art Show, New York, NY; The Science Gallery at Trinity College, Hartford, CT; the DeCordova Sculpture Park and Museum, Lincoln, MA; and three solo shows at Ronald Feldman Fine Arts, NewYork, NY. She is the recipient of grants from The Peter S. Reed Foundation, Creative Capital, LEF Foundation, Council for the Arts at MIT, and the Jacob K. Javitz Fellowship Program. She won the L’Oreal Promotion Prize in the Art and Science of Color for her research with physical pixels and has been awarded residencies at Otis College of Art and Design, Los Angeles, CA; MIT Center for Advanced Visual Studies, Cambridge, MA; Duke University, Durham, NC; Tortuga Escondida, Akumal, Mexico; and Art Interactive, Cambridge, MA. Heaton received her BA from Yale University and her MS from MIT. Learn more at kellyheatonstudio.com.